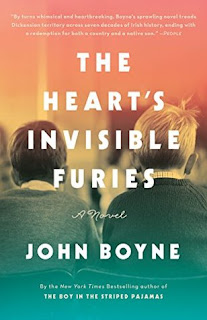 
Forced to flee the scandal brewing in her hometown, Catherine Goggin finds herself pregnant and alone, in search of a new life at just sixteen. She knows she has no choice but to believe that the nun she entrusts her child to will find him a better life.
Cyril Avery is not a real Avery, or so his parents are constantly reminding him. Adopted as a baby, he’s never quite felt at home with the family that treats him more as a curious pet than a son. But it is all he has ever known.
And so begins one man’s desperate search to find his place in the world. Unspooling and unseeing, Cyril is a misguided, heart-breaking, heartbroken fool. Buffeted by the harsh winds of circumstance towards the one thing that might save him from himself, but when opportunity knocks, will he have the courage, finally, take it?

This tremendous novel tracks the life of Cyril Avery, adopted at his birth just after the war. His adoptive parents are rather distant to him and tell him he’s not a real Avery. We see his life at snapshots of seven years and in school, he finds himself attracted to his best friend and room-mate. Because of the legal and church situation – he lives in Ireland – he keeps all his feeling under wraps and this affects his whole life. His choices, based on what he feels able to do and say, are a result of the times he lives in. It’s a great book, told with a lot of humour but there’s real sadness and regret there too. The characters are brilliantly drawn and I can’t help but feel I’ve met a lot of them. I wholeheartedly recommend this to anyone wanted a really engrossing story.

John Boyne was born in Ireland in 1971. The winner of three Irish Book Awards, he is the author of eleven novels for adults, five for younger readers and a collection of short stories. The international bestseller The Boy in the Striped Pyjamas was made into a Miramax feature film and has sold more than six million copies worldwide. His novels are published in over fifty languages. He lives in Dublin.

A great book should leave you with many experiences, and slightly exhausted at the end. You live several lives while reading ― William Styron