First Jo Fenton novel I've read and I would certainly go back for another. 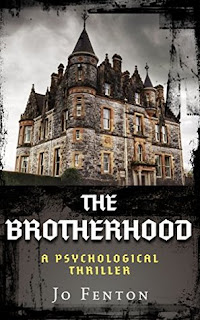 The Brotherhood – safe haven or prison?After her parents’ sudden death, a grieving Melissa falls back on her faith and into the welcoming arms of a religious sect. Captivated by their leader, Dominic, she leaves her old life behind and moves to the countryside to join them.But life in The Brotherhood is not as safe as it first appeared. When engineer Mark joins The Brotherhood, Melissa finds herself conflicted between her growing feelings for him and her crush on Dominic. With their leader's initial encouragement, Melissa and Mark grow close.But as her haven becomes a prison, Melissa's newfound happiness is destroyed by Dominic’s jealousy. How can she escape and save the ones she loves?

This book tackles the difficult subjects of charisma, power, manipulation and faith. Melissa finds herself in difficult circumstances and accepts an invitation to stay with The Brotherhood. Their leader, Dominic, introduces her and she’s in at the deep end. I found myself thinking the story was far-fetched till I remembered how many people are manipulated by someone they look up to. Eventually, they are harmed, but unable or unwilling to leave or fight back. I found Melissa’s struggle, together with those of the friends she made, also seemingly trapped in the Brotherhood, very engaging. Would she exert herself or would she, and all of them, remain in the power of a dominating madman? Read it and find out. It’s very good.


Jo Fenton grew up in Hertfordshire. She devoured books from an early age, particularly enjoying adventure books, school stories and fantasy. She wanted to be a scientist from aged six after being given a wonderful book titled "Science Can Be Fun". At eleven, she discovered Agatha Christie and Georgette Heyer, and now has an eclectic and much loved book collection cluttering her home office.Jo combines an exciting career in Clinical Research with an equally exciting but very different career as a writer of psychological thrillers.When not working, she runs (very slowly), and chats to lots of people. She lives in Manchester with her husband, two sons, a Corgi and a tankful of tropical fish. She is an active and enthusiastic member of two writing groups and a reading group.

Just a thought -
Rainy days should be spent at home with a cup of tea and a good book.― Bill Watterson,
Posted by Kath at 11:22