Bad to the Bone

First in a series and it's obviously from this strong start that it's going to be a good one. 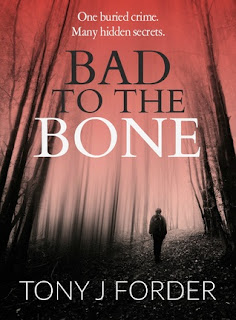 
A skeletal body is unearthed in a wooded area of Peterborough, Cambridgeshire. DI James Bliss, together with DC Penny Chandler, investigate the case and discover that the young, female victim had been relocated from its original burial site.
A witness is convinced that a young female was struck by a vehicle back in the summer of 1990, and that police attended the scene. However, no record exists of either the accident or the reported victim. As the case develops, two retired police officers are murdered. The two are linked with others who were on duty at the time a road accident was reported.
As Bliss and Chandler delve deeper into the investigation, they start to question whether senior officers may have been involved in the murder of the young women who was buried in the woods.
As each link in the chain is put under duress, so is Bliss who clashes with superiors and the media.
When his team receives targeted warnings, Bliss will need to decide whether to drop the case or to pursue those responsible.
Will Bliss walk away in order to keep his career intact or will he fight no matter what the cost?
And is it possible the killer is much closer than they imagined?
My review -

I thought it was about time I read some Tony Forder and I’m very glad I did. Interestingly, I read it on my holiday which included at day trip to Peterborough. It’s a delight to see the places you’re reading about on a tourist map! DI Bliss and his sidekick Penny investigate a body which, the pathologists say, has been exhumed and reburied. It’s an old case and therefore harder to solve. This is the first book in a series and I’m glad to say that the main characters in the book fall into place fully formed. Some of their back-stories creep in as we read so it doesn’t have the info-dump boredom. I thought this was very well done. I also loved the growing relationship between Bliss and The Bone Woman, Emily Grant. The ending built very nicely to a result I hadn’t foreseen and I enjoyed it very much.

Tony J Forder is the author of the critically acclaimed and best-selling crime thriller series featuring detectives Jimmy Bliss and Penny Chandler. The first four books, Bad to the Bone, The Scent of Guilt, If Fear Wins, and The Reach of Shadows, were followed by The Death of Justice on 9 September 2019.Tony's dark, psychological crime thriller, Degrees of Darkness, featuring ex-detective Frank Rogers, was also published by Bloodhound Books. This is a stand-alone novel, and delves into the mind of a serial-killer.Scream Blue Murder was published in November 2017, and received praise from many, including fellow authors Mason Cross, Matt Hilton and Anita Waller. A sequel, Cold Winter Sun, was released in November 2018.Tony is now a full-time writer and lives with his wife in Peterborough, UK.

There never yet have been, nor are there now, too many good books ― Martin Luther