Third in a cracking Thriller/Adventure/Crime series by Peter Boland. The characters just spark off one another. 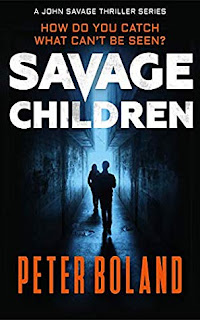 Children are disappearing from London parks. Caught on CCTV, they go in but never come out again…Days after each disappearance, the distraught parents receive a hand-drawn picture of their child as an angel. A sign they’ll never see them again. The police have no clues or leads. All they have is a nickname for the abductor – the Archangel.When Savage’s neighbour’s ten-year-old son Callum becomes a victim, he vows to find him, and catch this Archangel. Savage has his headstrong friend Tannaz to help him. This time it’s going to take more than her brilliant computer skills to find the truth. They’ll have to enlist the help of some new friends – and some old enemies.As more children go missing, Savage realises the Archangel is a formidable adversary. Clever, elusive and terrifying. Savage also has the police on his back, watching his every move. The deeper Savage becomes involved, the more he realises all is not what it seems…

Savage and his side-kick, the computer-whiz Tannaz, are on the search for someone kidnapping children. None have been returned and there are real fears for their lives. They become involved because the lad who lives next door to Savage is abducted. Police arrest him under suspicion as he often played football with the lad after school. This is a great story – Savage’s SAS training means he doesn’t back down even with a gang, and Tannaz is an expert hacker. She finds evidence but they can’t pass it to the police as she shouldn’t have it! It’s a rollicking good crime story and very exciting. I love this series.

After studying to be an architect, Pete realised he wasn't very good at it. He liked designing buildings he just couldn't make them stand up, which is a bit of a handicap in an industry that likes to keep things upright. So he switched to advertising, writing ads for everything from cruise lines to zombie video games.After becoming disillusioned with working in ad agencies, he switched to writing thriller novels (or was it because he just wanted to work at home in his pyjamas?). He soon realised there's no magic formula. You just have to put one word in front of the other (and keep doing that for about a year). It also helps if you can resist the lure of surfing, playing Nintendo Switch with his son, watching America's Next Top Model with his daughter and drinking beer in a garden chair.