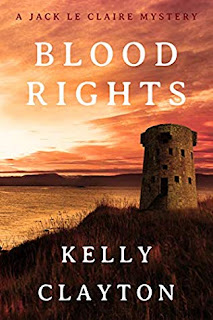 DCI Jack Le Claire is investigating the death of a high-profile resident on the Island of Jersey. But the killing has only just begun.

Kurt Englebrook has it all. He’s a hedge fund tycoon with a gorgeous younger wife, two grown sons and a loyal team around him. But Kurt has a secret; somebody knows what it is and is determined to make him suffer. Meanwhile, an argument rages over an ancient right-of-way and a historic tower.
Kurt’s sister-in-law, Chloe Marsden, is grateful to inhabit his world of privilege and plenty. But what Chloe cares most about can’t be bought.
They've killed once and crossed a line. Now there's no going back.
A brutal death reveals the widening cracks that threaten to break apart the Englebrooks and those connected to them.
A killer is on the rampage, but what do they want?
As the deaths mount up, Le Claire must trap a vicious killer, although he has numerous suspects and very few leads.

My review
A resident of the island of Jersey is found dead. He’s got enemies and it’s going to be a tough job for DCI Jack Le Claire to sort out the truth. Life on an idyllic island isn’t all it seems. Kelly Clayton is excellent at building tension and throwing in red herrings so that you don’t find out right to the end what has really gone on. I think this could be read alone, but if you’ve read the other three in the series you’ll appreciate the background. You’ll also have some idea what Le Claire has looming in his own past. It’s a very good story and will leave you wanting the next.

Kelly Clayton has lived in the Channel Island of Jersey for most of her life. An avid reader, Kelly has been writing for as long as she can remember but decided to get serious a few years back. The reason why is a story in itself and there is a TV clip that can be accessed through Kelly's Facebook page that explains what lay behind her motivation to get that first book published.Kelly's first novel, Blood In The Sand, was published in 2015, followed by Blood Ties and Blood On The Rock. The three books are part of The Jack Le Claire Mystery series, mainly set in Jersey but venturing to other locations as well. They can be read as part of the series or as stand-alones.In 2018, Kelly co-authored Cyber Sisters, about 4 women, online crime and whether you choose to fall down or fight back. The co-author is her husband, Grant Collins.Kelly has also published a historical romance/murder-mystery, Fortune's Hostage, under the pen-name of Julia Hardy.Kelly also has a busy day job, working in the finance industry. Although she loves what she does, Kelly adores the escapism of writing, of crafting stories and characters and putting them into and, hopefully, getting them out of peril.Kelly, her husband and their three cats live in a home overlooking the sea.

~~~
Just a thought
Some stories have to be written because no one would believe the absurdity of it all― Shannon L. Alder
Posted by Kath at 11:52