If you search on here for the name Neil Grimmett you will see how much I enjoyed his books The Hoard and The Threshing Circle. I was saddened to learn that he died after a short illness - far too soon - last November. I was informed that three more of his novels were published this June. This is one, and it's an enthralling and at times uncomfortable read. A family in tension. 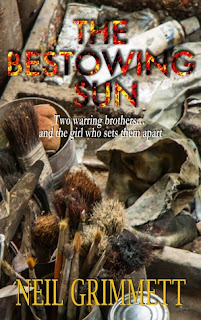 Brothers Richard and William have a tense relationship which hardens into enmity as they grow older. William is artistic and Richard feels that his parents favour him because of it. He’s excused jobs on the farm so he can paint. Richard feels all the work falls to him. They love the same girl, Selina and when she marries Richard, William leaves to paint abroad.

I really enjoyed the detail in this book. The countryside which is the setting for the farm comes to life. The parents, Herbie and Madeline, come under inspection as we see how each has influenced the men their children will become. It was hard to feel affection for any of the characters yet one is drawn to them and their sometimes furious anger. This is a brilliant depiction of a family in tension. It’s difficult not to draw a parallel with The Prodigal Son and I suspect the similarity in the title is no coincidence. If you read his compelling story you will become involved in the lives of the family.
I received a copy of this book from the author’s agent in exchange for an honest review.