Another funny Christmas short from Jonathan Hill which, at the time of writing, is free. Even better! 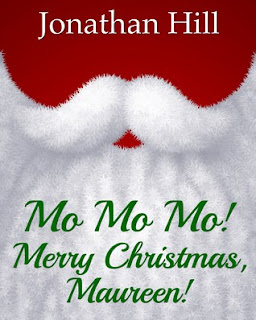 After Maureen receives a plea from her friend Louisa, she faces a challenge far greater than trying to keep her potted poinsettia alive…Spend Christmas with Maureen and her friends in this festive comedy novella, new for 2018!

Dear old Maureen! Apart from eating and drinking, she usually only opens her mouth to change feet. This time, under the baleful influence of a certain red coat, she is uncharacteristically hurtful, shocking even herself. Something’s up and someone bears a grudge. Her friends Louisa and Tim also feature and, as usual with Jonathan Hill, the slapstick is interspersed with thoughtful sections. I particularly liked Tim and Maureen comparing experiences of loneliness. Light and dark, silly and sad, it’s all in here. Cheers, dears!

Jonathan Hill is an author from Manchester, UK. His work isn't confined to one genre, but he has already published a number of gay literary fiction books to high critical acclaim. His debut novel 'FAG', a hard-hitting story set in an English boarding school in the 1930s, was named as the overall winner in the Self-Published and Small Press 2014 Book Awards.He has also penned the hit comedy series of Maureen books, in addition to numerous short stories and 100-word drabbles. Jonathan firmly believes that writing should not only entertain but also enhance and change the way readers view the world.When he's not writing and working as a pharmacist, he enjoys painting, photography and going to the the theatre.

Just a thought - Where is human nature so weak as in the bookstore?
― Henry Ward Beecherr
Posted by Kath at 14:01