Ross Greenwood is a fairly new author to me but I do like his style and his thoughtful take on things. 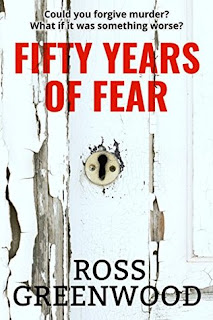 Could you forgive murder? What if it was something worse?

A childhood accident robs Vincent of his memories, causing him to become sensitive and anxious around others. His differences attract bullies, and he comes to rely heavily on the support of his family.

After the devastating loss of his parents, a remarkable woman teaches him to embrace life and, little by little, he realises the world is far more forgiving than he imagined. When fragments of his memory return, he begins to unravel his past.

Who was his mother? What kind of a man is his brother, Frank? And why does death surround them?

Fate is cruel. History is dark. Things are not as they seem.

Perhaps he should have stayed at home.

Although this book is about the life of a fairly ordinary man I found it completely engrossing. Vincent retells fifty years of a life lived as a fearful loner. His few relationships are less than satisfactory and his brother disappears from his life for years at a time. Vincent’s great sin seems to be a naiveté but it causes him a huge problem. By the end, although he is a character shunned by many, it’s hard not to sympathise with him. The author has a way of putting you into a character’s mind so you can see the world from his point of view. There’s a question of whether evil traits are heritable or not and the whole story really stretches your mind. Highly recommended.