The second in the Dark Lives trilogy by Ross Greenwood. I must make sure I read the third. 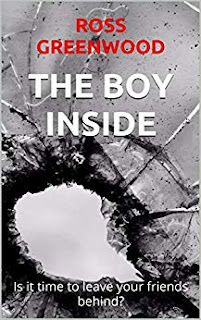 Book 2 of the critically acclaimed Dark Lives SeriesWith absent parents and broken friends, a young Ben makes choices that could ruin his life. After two spells in prison, he finds himself involved in more serious crime. Soon, he finds himself in situations out of his control with a woman he doesn't love. Ben looks to escape but finds that leaving is not an option.Will Ben escape before people begin to die?

Ross Greenwood knows better than most what life in prison is like, as he used to be a prison officer. In this book we can see, through the early life of Ben Jones, that a life can balance on a knife edge. Ineffective parenting, the lack of a parent for one reason or another, the influence of unsuitable friends, and just one bad decision can push a boy like Ben onto the steep slope of a criminal life. Ben has a couple of opportunities to change his future and go straight but the lure of money is too strong. I found the waste of young lives quite haunting. The writing is engaging and gets right to the point. I hope there are still people within the prison service who share Ross Greenwood’s humanity and understanding. This is a book you’ll remember.

I was born in 1973 in Peterborough and lived there until I was 20, attending The King's School in the city. I then began a rather nomadic existence, living and working all over the country and various parts of the world.I found myself returning to Peterborough many times over the years, usually when things had gone wrong. It was on one of these occasions that I met my partner about 100 metres from my back door whilst walking a dog. Two children swiftly followed. I'm still a little stunned by the pace of it now.Fifty Years of Fear book was started a long time ago but parenthood and then after working in sales management all my life, i randomly spent four years as a prison officer. Ironically it was the four a.m. feed which gave me the opportunity to finish the book as unable to get back to sleep I completed it in the early morning hours.I've now written five further books. My second book, The Boy Inside, was picked up by a publisher, and Lazy Blood is also out. All my books are thought provoking, and told with a sense of humour. Reading the reviews has been great.The first three books are stand alone, however, some of the characters cross over, and you can see how at times, their lives overlap.

Just a thought - In the case of good books, the point is not to see how many of them you can get through, but rather how many can get through to you.
― Mortimer J. Adler
Posted by Kath at 11:51