I've read a trilogy by Will Patching and have been intending to read this book for some time. It's the start of another trilogy and it's hooked me! 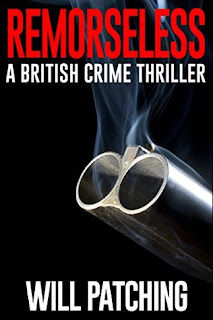 
Peter Leech is a cunning, devious killer, brutalized by half a lifetime in prison for the vicious murder of his parents. Now he’s up for parole and, one way or another, he wants out.
He's driven by his obsessive lust for Judy Finch - an attractive parole officer who spurned his advances - and his thirst for revenge on those he blames for his conviction.
His nemesis, Doc Powers, the forensic psychiatrist who assessed his mental health for trial, is now on the panel reviewing Leech’s parole application. But Doc fears for his own sanity. His feelings of guilt over his wife’s death and his terrible experiences as a criminal profiler threaten to overwhelm him. Hallucinations haunt Doc as he struggles to convince his colleagues that Leech is a dangerous unreformed psychopath.
A blossoming relationship with Judy helps Doc heal – emotionally and professionally – but he soon discovers he’s ill-prepared for Leech’s re-entry into his life...

My review -
I’ve read Will Patching’s work before so I knew I was in for an exciting ride. This is the story of a very manipulative man who is released after eighteen years in prison. He maintains his innocence of the original crime. The author takes us into his mind and we realise how deep is his thirst for revenge. It’s impossible to predict who will end up in his sights. I enjoyed every moment of this fast-paced thriller.

Will Patching writes gritty crime stories that mix murder mystery, psychological suspense and intense thrills while offering unique insights into the darker side of human nature. His 'pull no punches' style and sparse but often brutal descriptive passages will not suit all readers, so if you are into cozy mysteries you might want to look elsewhere!With complex plots and rounded characters, Will's novels are necessarily longer than average, usually well over 100,000 words, so these are definitely stories designed for readers who like to really get their teeth into a good yarn!

Just a thought - I cannot sleep unless I am surrounded by books.
― Jorge Luis Borges
Posted by Kath at 11:16

Email ThisBlogThis!Share to TwitterShare to FacebookShare to Pinterest
Labels: Will Patching - thriller