New-to-me author Liam McIlvanney has written a complex and satisfying book about a true story of 1960s Glasgow. 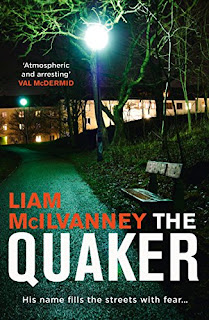 
A city torn apart.
It is 1969 and Glasgow has been brought to its knees by a serial killer spreading fear throughout the city. The Quaker has taken three women from the same nightclub and brutally murdered them in the backstreets.
A detective with everything to prove.
Now, six months later, the police are left chasing a ghost, with no new leads and no hope of catching their prey. They call in DI McCormack, a talented young detective from the Highlands. But his arrival is met with anger from a group of officers on the brink of despair.
A killer who hunts in the shadows.
Soon another woman is found murdered in a run-down tenement flat. And McCormack follows a trail of secrets that will change the city – and his life – forever…

A new detective, McCormack, is brought in when the Glasgow police fail to find a serial killer, known as The Quaker. This story, based on truth, is set on the 1960s and has a strong sense of time and place. McCormack’s frustration with lack of progress and with the antipathy of the team he has joined is evident to the reader. Another murder, an apparent breakthrough, draws him to a different conclusion form that of the team. I really enjoyed his through processes and the way he arrived at his own conclusion. Nothing in this story was simple. People who knew things were in too deep and his own background worked against him. So many dilemmas. Sometimes doing the right thing is not good for you personally. This is an exceptional crime story with so much more than plain right and wrong on the table. Highly recommended.

Professor Liam McIlvanney, the son of novelist William McIlvanney, was born in Kilmarnock in Ayrshire, and studied at Glasgow and Oxford Universities. After ten years lecturing in Scottish and Irish literature at the University of Aberdeen, he moved to Dunedin in New Zealand to teach at the University of Otago. He lectures in Scottish literature, culture and history, and on Irish-Scottish literary connections, and holds the Stuart Professor of Scottish Studies chair at the University.He won a Saltire Award for his first book, Burns the Radical, in 2002. A chance meeting with an editor for Faber and Faber persuaded him to turn to fiction, and his first novel, All the Colours of the Town, was published in 2009 to great acclaim. His second thriller, Where The Dead Men Go, which saw the return of journalist Gerry Conway, won the prestigious Ngaio Marsh Award for Best Crime Novel in 2014. He has also written reviews and criticism for the London Review of Books, The Guardian, and others. He lives in Dunedin with his wife and three children.

Just a thought - Some of these things are true and some of them lies. But they are all good stories.
Hilary Mantel