A short book - six short stories - but so well written and engaging. 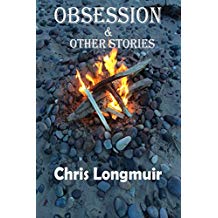 Book description
Obsession & Other Stories is a collection of scary, dark, and gritty crime stories as well as a couple of gentler ones to soothe the nerves.There are no zombies, were wolves or vampires in these stories, although I can’t guarantee you won’t come across any skeletons, when you walk on the dark side with me. Come along with me and I will introduce you to some scary people and after you’ve been in their minds and shared their thoughts, you’ll be glad of the light relief at the end.‘Obsession’ - is a dark story about a stalker, and not recommended for those of a nervous disposition. This was the story which gave birth to the Night Watcher and is the precursor of the novel.‘In Zofia’s Footsteps’ - is the story of migrant fruit pickers working on a fruit farm in Scotland. Make up your own mind whether or not there is a hint of the paranormal in this one.‘Not a Bad Person’ - is a gritty story which introduces Baz, a heroin addict and what he feels compelled to do to acquire money to feed his habit.‘Ghost of Christmas Past’ - is a gentle ghost story which is not in the least scary, although I’m better known for my scary stories.‘Sin’ - is a tale of the Magdalene Laundries, the institutions for unmarried mothers which were infamous in Ireland in the not too distant past.‘Santa’s Little Helper’ - a little bit of nonsense to finish off with.


This little collection of short stories really shows the author’s versatility. We go from humour, through sadness and longing, to an unsettling creepiness. It’s a good way to dip into what an author is capable of. I’ve read one of Chris Longmuir’s full length novels which I enjoyed a great deal. There is an evening’s entertainment in this short collection and not a duff one in there. It’s a great little read.

Chris is an award-winning novelist and has published three novels in her Dundee Crime Series. Night Watcher, the first book in the series, won the Scottish Association of Writers’ Pitlochry Award, and the sequel, Dead Wood, won the Dundee International Book Prize, as well as the Pitlochry Award. Missing Believed Dead is the third book in the series.Chris has recently published the first book in a new series set just after the Great War. This series features Kirsty Campbell, Dundee’s first policewoman. Her next book, to be published soon, is another Kirsty Campbell mystery set during the First World War.She has also published a non-fiction book entitled Crime Fiction and the Indie Contribution. This is an examination of crime fiction as well as an evaluation of independently published books in this genre.

~~~
Just a thought - Many a book is like a key to unknown chambers within the castle of one’s own self.
― Franz Kafka