My first Ross Greenwood book. What a stunner! 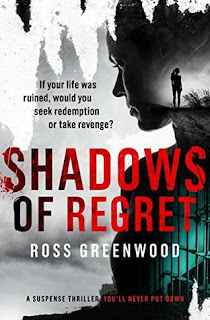 Katie committed a terrible crime. Sixteen years was the price she had to pay.Once released from prison, she finds the world has changed. But Katie is a survivor.Isolated and alone, she struggles to make sense of her new life. Starting again isn’t easy, especially after what she’s done.Despite not feeling free or safe, Katie overcomes her fears and confronts the future. Although history won’t remain forgotten.Gradually, memories of the past are revealed. When Katie finally exposes the awful truth and sees there are others who share the blame, she must choose her path.Will she seek redemption, or will she take revenge?

Katie is being released after sixteen years in prison. Over the course of the story we see what she did to merit this sentence. Sixteen years is a long time for regrets and anger to fester and the book shows us how she deals with them. She’s intelligent and resourceful but trusts very few people. I have to say that in spite of her past, I warmed to her a great deal. She’d got the mucky end of the stick in life. The book’s well written and we are seeing the world from inside a young woman’s mind, brilliantly done by this male author. In parts it’s sad, exciting, thought provoking but never at any point is it boring.

I was born in 1973 in Peterborough and lived there until I was 20, attending The King's School in the city. I then began a rather nomadic existence, living and working all over the country and various parts of the world.I found myself returning to Peterborough many times over the years, usually when things had gone wrong. It was on one of these occasions that I met my partner about 100 metres from my back door whilst walking a dog. Two children swiftly followed. I'm still a little stunned by the pace of it now.

Shadows of Regret was inspired by my time on the women's side of the jail in Peterborough, and analyses the close relationship between victim and villain. You won't have read a book like it.

Just a thought - Once you have read a book you care about, some part of it is always with you.
Louis L'Amour
Posted by Kath at 13:55