My first David Blake book, though he has written a fair number of books in the humour category.  This is the first in a series and a fine taste of things to come. 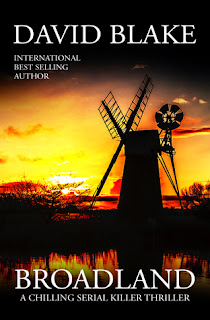 When a girl’s body is found strangled, raped, and horrifically mutilated by a boat’s propeller, deep in the heart of the Norfolk Broads, newly arrived Detective Inspector John Tanner is asked to assist with the investigation. At first, all the evidence points to a man who had a multi-million pound reason to kill her. But when an alibi is produced from an unexpected source, and another body appears at the base of a slipway, Tanner finds himself turning to local girl, Detective Constable Jenny Evans for help. As a more romantic relationship develops between them, they find themselves facing a race against time to identify a lethal adversary, one with a lust for blood and a mind set on revenge.Set within the mysterious beauty of the Norfolk Broads, this fast-paced British detective series is a murder mystery with a slice of humour and a touch of romance, one that will have you guessing until the very end, when the last shocking twist is finally revealed.


First in a new series set in the Norfolk Broads. I enjoyed the characters, and DI Tanner’s growing relationship with his new colleagues after his transfer from London. It’s a good puzzle and several times I thought I’d sorted who was guilty – but things aren’t as simple as I believed them to be. This has all the signs of being a very enjoyable new series. Certainly this first volume is.

David Blake is a full-time author living in North London. To date he has written fourteen books along with a collection of short stories. He’s currently working on his fifteenth, St. Benet’s, which is the follow-up to his debut crime fiction thriller, Broadland.When not writing, David likes to spend his time mucking about in boats, often in the Norfolk Broads, where his crime fiction books are based.

Most of what makes a book 'good' is that we are reading it at the right moment for us.
― Alain de Botton