A worthy follow up to Savage Lies - and I think it's even better. Well developed characters and a cunning story. 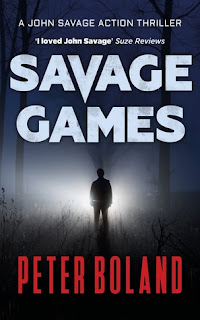 Deep in the New Forest, a body is hidden in the branches of a towering fir tree in an area known as Dead Maids Wood. When John Savage learns that the body belonged to an old school friend, he sets out to discover who was responsible. Together with brilliant computer hacker Tannaz, he discovers his friend was down on his luck, living among those who society would rather forget - the dregs, the desperate and the homeless. Entering this dark and hidden world, Savage soon discovers that the death of his friend was just the tip of the iceberg...

Savage Games is that difficult to pull off second in a series. I loved Savage Lies and I think this is even better. Ex-SAS John Savage, still battling his own PTSD demons, determines to right some serious wrongs after an old friend from school is found dead. The plotting is tight, the pace fast and the characters are believable. For such a serious subject it’s surprisingly funny too. Savage and his assistant and IT expert Tannaz have clever mouths and don’t know when to button them. I cringed a few times expecting the worst but these two can fend for themselves. Even though it’s a second book, it would read well as a stand-alone. I’m now a huge fan of these characters and look forward to more from John Savage. Erm, I mean Peter Boland!

After studying to be an architect, Pete realised he wasn't very good at it. He liked designing buildings he just couldn't make them stand up, which is a bit of a handicap in an industry that likes to keep things upright. So he switched to advertising, writing ads for everything from cruise lines to zombie video games.After meeting his wife Shalini and having two awesome children (their words), he was amazed when she sat and actually wrote a book. Then another and another. They were good too. Really good. So he thought, I'll have a go at that.He soon realised there's no magic formula. You just have to put one word in front of the other (and keep doing that for about a year). It also helps if you can resist the lure of surfing, playing Nintendo Switch with his son, watching America's Next Top Model with his daughter and drinking beer in a garden chair.

~~~
Just a thought
You cannot open a book without learning something ― Confucius
Posted by Kath at 12:47