Short in name, long on ideas, XX is the first novel of Angela Chadwick. 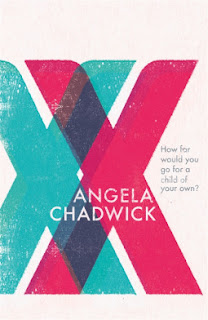 HOW FAR WOULD YOU GO FOR A CHILD OF YOUR OWN?


When Rosie and Jules discover a ground-breaking clinical trial that enables two women to have a female baby, they jump at the chance to make history.
Fear-mongering politicians and right-wing movements are quick to latch on to the controversies surrounding Ovum-to-Ovum (o-o) technology and stoke the fears of the public. What will happen to the numbers of little boys born? Is there a sinister conspiracy to eradicate men at play?
In this toxic political climate, Jules and Rosie try to hide their baby from scrutiny. But when the news of Rosie's pregnancy is leaked to the media, their relationship is put under a microscope and they're forced to question the loyalty of those closest to them, and battle against a tirade of hate that threatens to split them apart...

My review
The premise of this book is a scientific advance which allows the ova of two women to be fused to create a new life, the so-called ovum to ovum fertilisation. It has that speculative, science-fiction sound to it, which initially drew me to the book. It’s not high on science, though, but is very good on social analysis. Jules, a journalist, and Rosie, working in a bookshop, apply to be in the first group and are successful.

When they do a test and find that Rosie really is pregnant, their own feelings are different from one another. Worst of all, someone leaks their names to the media. What follows is persecution by so many groups, religious, political, and many more. Will this see the end of baby boys? Will men be a minority? This was what fascinated me about the book. This in-depth but gripping analysis of what it meant to the two women, their families, friends, and the wider world. It was utterly engrossing and I loved it.

Angela Chadwick trained as a journalist and worked as a reporter before becoming a communications manager within higher education. XX is her first novel.

We owe it to each other to tell stories ― Neil Gaiman