Second in a series by Will Patching. Not for the squeamish, but if you like your crime gritty and nasty, this is the book for you! 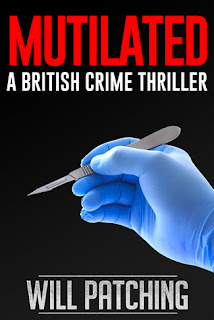 
A serial killer challenges criminal profiler, Doctor Colin Powers, to solve several cold case mutilation murders, while Detective Inspector Jack Carver investigates a newly dismembered victim.
An unlikely coincidence?
Is a vicious psychopath from Doc’s past somehow involved, despite having been incarcerated for two decades?
And most importantly to Doc, where is his lover, Judy Finch, who went missing several months ago..?
Find out in Mutilated - the second 'stand alone' novel in this dark, gritty, British Crime Thriller trilogy.
My review -
Second in a series, this is not for the squeamish. In a complex story, Will Patching shows us the work of an evil genius who uses others for his own ends. He uses punishment by mutilation, but pulls others into his orbit to taunt DI Carver and his consultant, Doctor Powers. It’s a graphic, exciting and pretty horrific story in which nothing is quite as simple as it first appears. A great read.

Will Patching was born and raised in ‘Sarf Lunnon’, Engerland, or at least, that’s how he pronounces it! Hence, many scenes from his novels are situated in London, the surrounding suburbs and other parts of southeast England, though they also span as far afield as Thailand and the USA.His approach to writing is to hit the reader with hard truths about the world we live in, and his mysteries, thrillers, and suspense novels are designed to set your pulse pounding. One male reader decided he needed to check his door locks late one night while reading Remorseless and subsequently commented on social media: ‘Seriously scary!’

Email ThisBlogThis!Share to TwitterShare to FacebookShare to Pinterest
Labels: Will Patching - thriller