The third book I've read by Jane Harper and for me, the best yet. 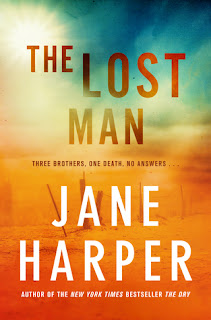 Two brothers meet at the border of their vast cattle properties under the unrelenting sun of outback Queensland, in this stunning new standalone novel from New York Times bestseller Jane HarperThey are at the stockman’s grave, a landmark so old, no one can remember who is buried there. But today, the scant shadow it casts was the last hope for their middle brother, Cameron. The Bright family’s quiet existence is thrown into grief and anguish. Something had been troubling Cameron. Did he lose hope and walk to his death? Because if he didn’t, the isolation of the outback leaves few suspects…


This is an excellent story that emphasises the heat and loneliness of outback living. Nathan, oldest of three brothers and divorced, finds his middle brother, Cameron, has died by an old grave, known as the stockman’s grave. His car is found some distance away, full of bottles of water and supplies. Did he walk to his own death? It’s just before Christmas and the family say he was troubled. Nathan, with troubles of his own, tries to find out what prompted his brother to walk into the outback apparently to commit a painful suicide.

The main protagonists in this story are members of one family and the dynamic amongst them is uneasy, troubled. Not just because they’ve lost a member. The reader feels the deep currents below the surface as bit by painful bit, the truth comes out. I found this very gripping and for my money it’s Jane Harper’s best book yet.

Jane Harper is the author of The Dry, winner of various awards including the 2015 Victorian Premier's Literary Award for an Unpublished Manuscript, the 2017 Indie Award Book of the Year, the 2017 Australian Book Industry Awards Book of the Year Award and the CWA Gold Dagger Award for the best crime novel of 2017. Rights have been sold in 27 territories worldwide, and film rights optioned to Reese Witherspoon and Bruna Papandrea. Jane worked as a print journalist for thirteen years both in Australia and the UK and lives in Melbourne.

Books, the children of the brain ― Jonathan Swift,