My first Chris Longmuir book and it's a great read. 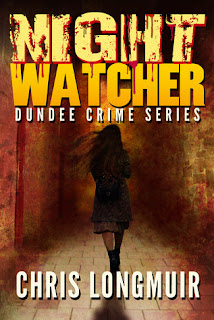 Evil stalks the streets of DundeeA dark compelling novel of revenge, obsession, and murderTwo stalkersJulie – a woman with revenge on her mind.The Night Watcher – a psychopathic killer with a missionOne targetNicole – an unfaithful woman with a weakness for other women’s husbands.Will Julie’s mind games drive Nicole over the edge into madness?Or will Nicole pay the ultimate price for her sins?And what will happen when the Night Watcher turns his attention to Julie?DS Bill Murphy must find the killer before he kills again.

This is a tense and atmospheric stalking story and I confess I didn’t know who was the stalker till the very end. Someone feels he is acting out God’s purpose by getting rid of the Chosen Ones. There are intricate overlaps of people’s lives and their extra marital affairs. Nobody seems entirely blameless yet we don’t understand The Watcher’s criteria. I really enjoyed this book and found plenty to think about, especially at the end. Highly recommended.

Chris is an award-winning novelist and has published three novels in her Dundee Crime Series. Night Watcher, the first book in the series, won the Scottish Association of Writers’ Pitlochry Award, and the sequel, Dead Wood, won the Dundee International Book Prize, as well as the Pitlochry Award. Missing Believed Dead is the third book in the series.Chris has recently published the first book in a new series set just after the Great War. This series features Kirsty Campbell, Dundee’s first policewoman. Her next book, to be published soon, is another Kirsty Campbell mystery set during the First World War.She has also published a non-fiction book entitled Crime Fiction and the Indie Contribution. This is an examination of crime fiction as well as an evaluation of independently published books in this genre.Her crime novels are set in Dundee, Scotland, and have been described as scary, atmospheric, page turners. Chris also writes historical sagas, short stories and historical articles which have been published in America and Britain. However, A Salt Splashed Cradle is the only historical saga currently published. Writing is like an addiction to me, Chris says, I go into withdrawals without it. She is currently working on a new Kirsty Campbell novel.Chris is a member of the Society of Authors, the Crime Writers Association and the Scottish Association of Writers. She designed her own website and confesses to being a techno-geek who builds computers in her spare time.

Just a thought - Be careful about reading health books. Some fine day you'll die of a misprint.
― Markus Herz
Posted by Kath at 11:47