This is part three of a series by G J Reilly. Fantasy for young adults - and others! 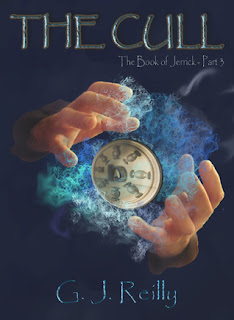 Called out of retirement to repay their debt, an ancient coven will soon arrive at Grimm's library. An unexpected hero will rise, and London will burn.With the series awarded two IndyB.R.A.G medallions (Inquisitor - 2015, and Piper - 2016), The Cull continues to bring the thrilling world of The Book of Jerrick to life. This penultimate episode is the darkest yet, once again weaving fairytale favourites into its intricate web.

The book is heavy on action between rival groups. This was set up in the previous two volumes and now we begin to understand why former best friends Michael and Tamara have ended up on opposite sides. We can now see what is dictating Tam’s cold attitude, even to those on her own side. Making use of fairy tales and fantasy figures woven into all our psyches, the book contains battles, deaths and a reconciliation. I look forward to reading the final part of this absolute blockbuster of a story.

By day, G. J. Reilly is a teacher of (mostly) ICT in the South Wales valleys, where he lives with his long suffering wife and 1.4 cats. By night, he is an author and occasional instructor of martial arts.Having gained his degree, he spent ten years working in industry, before deciding to change career and head into education. In many ways it is the many wonderful people he has taught that have shaped his characters and story telling, and it is for those people that his books are intended.With an interest in high fantasy, contemporary fantasy and science fiction from a young age, it comes as no surprise that his first work falls into the Young Adult Contemporary Fantasy genre.