Maggie James gives a real insight into the results of sensory deprivation in this new psychological thriller. 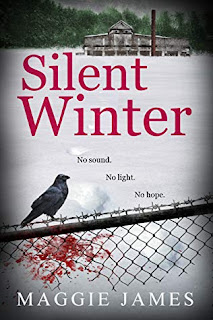 
On an icy November night, Drew Blackmore is beaten unconscious, then abducted.  He awakes to find himself in total darkness, naked and chained to the floor.  Fed just enough to keep him alive, Drew is unable to identify his captor, or the reason for his incarceration. As reality fades, hallucinations take over. Can Drew escape his prison before madness claims him?
Meanwhile Drew's wife, Holly, despairing of ever seeing him again, turns to his brother for comfort. As the worst winter in decades sweeps the UK, she learns of Drew's tragic past. Could his disappearance be connected with that of a prostitute years before?

Drew is abducted and kept in a dark place for four months, chained to the floor and with very low food and water. Maggie James brilliantly describes the psychological effects of this and the hallucinations it brings on. At home, his wife, brother and sister-in-law struggle to cope too. Drew is released, in a very bad way both physically and mentally, presumably by one of his abductors. His imprisonment takes up the first part of the book and the ensuing changes in his mental and physical health and the family relationships take up the rest. It’s a very good read and throws up some surprises towards the end.

Maggie James is a British author who lives near Newcastle. She writes psychological suspense novels.Before turning her hand to writing, Maggie worked mainly as an accountant, with a diversion into practising as a nutritional therapist. Diet and health remain high on her list of interests, along with travel. Accountancy does not, but then it never did. The urge to pack a bag and go off travelling is always lurking in the background! When not writing, going to the gym, practising yoga or travelling, Maggie can be found seeking new four-legged friends to pet; animals are a lifelong love

What is reading but silent conversation ― Walter Savage Landor
Posted by Kath at 13:42