I'm a new reader to Theresa Talbot's work but I really enjoyed this book. 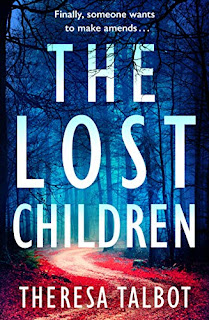 
Investigative journalist Oonagh O'Neil's instincts tell her when a story is worth pursuing. And the death of an elderly priest on the altar of his Glasgow church, just as she is about to expose the shocking truth behind the closure of an infamous Magdalene Institution, tells her a sinister cover up is in play.
DI Alec Davies is appointed to investigate the priest's death. He and Oonagh go way back. But now they're united in uncovering not only what happened to the lost babies secretly born in the Institution, but what happened to the young women that survived by vowing loyalty to one another... forever.
The doors of the Magdalene laundries hid the most harrowing secrets from the world – secrets Oonagh is determined to reveal, whatever the price...
'The Lost Children is Theresa's debut crime novel.

Oonagh O’Neil, the main character in the book, is an Irish-born investigative journalist living in Glasgow. The book is a long one but covers so many threads which the author cleverly weaves together so it seems to fly by. She is investigating the stories of the Magdalene Houses where young girls were sent to have their illegitimate babies. They were effectively prisoners and those who put them in that condition were, in some cases, those who should have been their protectors. Oonagh becomes embroiled in the story to her own detriment and the denouement is exciting. I was completely in thrall to this book and heartily recommend it.

Theresa Talbot is a freelance writer, journalist and radio presenter, perhaps best known as the voice of Traffic and Travel on BBC Radio Scotland and as the host of The Beechgrove Potting Shed. Prior to working with the BBC she was with Radio Clyde and the AA Roadwatch team. Theresa worked in various roles before entering the media as an assistant in children's homes, a Pepsi Challenge girl and a library assistant. She ended up at the BBC because of an eavesdropped conversation on a no.66 bus in Glasgow. Her passions include rescuing chickens, gardening, music and yoga.

A book is more than the sum of its materials. It is an artifact of the human mind and hand - Geraldine Brooks