This is a bit of a departure for Steve Robinson and I really enjoyed the way my view of a character changed as the story progressed. 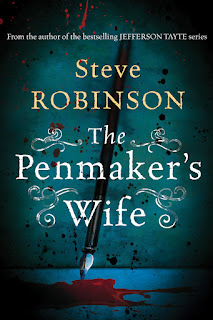 In Victorian England, a mother is on the run from her past—and the truth about what she did.

Birmingham, 1880. Angelica Chastain has fled from London with her young son, William. She promises him a better life, far away from the terrors they left behind.

Securing a job as a governess, Angelica captures the attention of wealthy widower Stanley Hampton. Soon they marry and the successful future Angelica envisaged for William starts to fall into place.

But the past will not let Angelica go. As the people in her husband’s circle, once captivated by her charm, begin to question her motives, it becomes clear that forgetting where she came from—and who she ran from—is impossible.

When tragedy threatens to expose her and destroy everything she’s built for herself and William, how far will she go to keep her secrets safe? And when does the love for one’s child tip over into dangerous obsession?

Alias Grace meets Peaky Blinders in this tale of obsession, ambition and murder in Victorian England.

Steve Robinson is a London-based crime writer. He was sixteen when his first magazine article was published and he’s been writing ever since. A love for genealogy inspired his first bestselling series, the Jefferson Tayte Genealogical Mysteries, and with The Penmaker's Wife he is now expanding his writing to historical crime, another area he is passionate about. He can be contacted via his website, www.steve-robinson.me, or his Facebook page, www.facebook.com/SteveRobinsonAuthor, where you can also keep up to date with his latest news.