This is the first of a new fantasy series by David Staniforth.  There are two books in his Fuel to the Fire series and he is writing a third.  Alloria is a new venture. 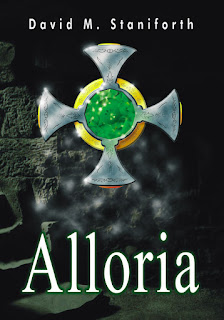 This charming fantasy tale is the story of a 10 year old girl named Alloria and her friend Nathan who get lost in a labyrinth between worlds and come out somewhere they don’t expect. They meet a fearsome looking man, become captured by a wizard who drains his power from children and they manage to help Alloria’s adoptive parents who have been attacked and left for dead. There is magic here and strange creatures, some helpful, some vicious. I enjoyed the ‘quest’ style tale and following the story from one world to another.
David Stanforth has a way with words and some of his descriptions of the worlds his creations inhabit are absorbing and inspiring. He can draw an attractive character who is overwhelmingly ugly, yet his baddies are totally obnoxious. One, Glebester, is so vile I shudder when reading the wonderful descriptions. I’ve always had a soft spot for fantasy and I love the fact that Alloria’s power is described as coming from the love she received growing up. You can feel her caring and the strength she and others draw from it. It brings up the old nature/nurture question as Alloria inherits from one set of parents but is brought up by another. It’s a great concept and I know that the end of the book will not be the end of the series! Great. Bring it on!
Posted by Kath at 14:37