A supernatural thriller that ticks all the boxes. John Bowen has done it again. 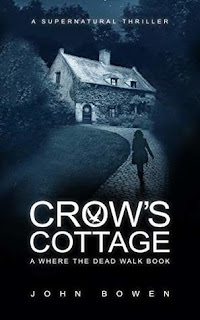 
A dead man. A missing woman. A haunted cottage. A secret hidden for thirty years…
In 1988 a famous record producer took his own life and a woman vanished after attending a party at Crow’s Cottage.
When the cottage’s owner passes away decades later, the property falls into the hands of his nephew, who finds a strange box hidden there. It is a replica of an infamous occult device called the Mephisto Arcane. In the wake of its discovery come sightings of an apparition. The crew of the paranormal TV show Where the Dead Walk are invited to investigate the haunting.
They are about to find the past guards its secrets jealously, and that unlocking them has consequences.

My review -
I love a bit of a supernatural tale and John Bowen really has a way of telling them. Renovations at the cottage produce a mystery artefact and the Where the Dead Walk team are called in to investigate. There’s a really spooky atmosphere here but, as with WTDW, it’s often what goes on in real life that’s the big deal. John Bowen has a brilliant way with atmosphere and tension. It’s not necessary to have read WTDW which I think he’s surpassed with this book. Completely engrossing. A brilliant stuff!

John Bowen is a multi genre thriller author who lives in the UK. When not playing video-games, reading, catching up on movies, going to the gym, and enjoying time with his wife and children he occasionally finds time to write…His debut novel supernatural suspense thriller WHERE THE DEAD WALK is an Amazon Top #100 Bestseller, his most recent novel, murder mystery, DEATH STALKS KETTLE STREET is an Amazon Top #10 Bestseller, his action adventure thriller, VESSEL is a #1 Bestseller in Kindle Thriller and Mystery, and his short story collection COLD SWEATS & VIGNETTES is a #1 Bestseller in Short Fiction. CROW'S COTTAGE is the the sequel to WHERE THE DEAD WALK.

Just a thought - You cannot open a book without learning something.
― Confucius
Posted by Kath at 16:13