Another absolute belter from Angie Marsons. 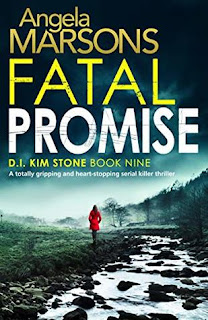 When the body of a doctor is discovered brutally murdered in local woodland, Detective Kim Stone is shocked to discover the victim is Gordon Cordell – a man linked to a previous case she worked on involving the death of a young school girl. Gordon has a chequered past, but who would want him dead?As the investigation gets underway, Gordon’s son is involved in a horrific car crash which leaves him fighting for his life. Kim's sure this was no accident. Then the body of a woman is found dead in suspicious circumstances and Kim makes a disturbing link between the victims and Russells Hall Hospital. The same hospital where Gordon worked.With Kim and her team still grieving the loss of one of their own, they’re at their weakest and facing one of the most dangerous serial killers they’ve ever encountered. Everything is on the line. Can Kim keep her squad together and find the killer before he claims his next victim?The killer is picking off his victims at a terrifying pace, and he’s not finished yet.


This book leans upon the previous story and the changes it meant for Kim and her team. A doctor is brutally murdered – and he was part of the story of Dying Truth. More bodies follow and the team, still trying to get to grips with a past they can’t recover, work punishing hours, even though Kim is still suffering from an injury. The story is entwined with one of a missing girl and they run in parallel, as cases must in real life. There are plenty of heart-stopping moments. Angela Marson’s stories never get stale. This is a belter.

Angela Marsons is the Wall Street Journal and USA Today bestselling author of the DI Kim Stone series and her books have sold more than 3 million in 3 years.She lives in the Black Country with her partner, their cheeky Golden Retriever and a swearing parrot.She first discovered her love of writing at Junior School when actual lessons came second to watching other people and quietly making up her own stories about them. Her report card invariably read "Angela would do well if she minded her own business as well as she minds other people's".

Just a thought
Which of us has not felt that the character we are reading in the printed page is more real than the person standing beside us? ― Cornelia Funke