This second in a new series is Caroline Mitchell at her best. 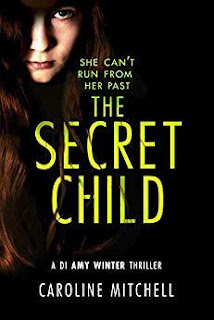 
DI Amy Winter knows evil. She’s lived through it.
Four-year-old Ellen is snatched by a stranger in the dead of night. Her devastated mother, Nicole, receives four identical phials and a threatening note in a familiar scrawl that chills her to the bone. But she always knew this would happen. She’s been expecting it for years . . .
According to the note, one of the phials is poisoned. Nicole is given a deadly challenge: if she drinks one, the sadistic kidnapper will notify the police of Ellen’s location. The sender claims to be Luka Volkov but Luka is supposed to be dead, killed long ago in a fire that haunts all those involved.
DI Amy Winter is still reeling from the discovery that she is the daughter of a serial killer, and her childhood trauma only makes her more determined to bring Ellen home. When another child is taken, Amy finds herself in a race against time. To rescue the children, must she seek help from the one person she wants to forget?

This is the second DI Amy Winter story and it’s as fast and furious as the first (Truth and Lies). Two child kidnappings open the curtains on a scientific institute in the 1980s. Someone is seeking revenge. This is an interesting study of childhood trauma, comparing and contrasting the kidnapper’s with Amy’s own. It’s a fresh look at an old subject and given Amy’s background, she’s uniquely equipped to investigate. I’m really enjoying this series. Many a fictional DI is portrayed as deeply flawed and it gets a bit samey. Amy Winter is burdened by her genes. Her fear of her parents’ flaws. A very good story and refreshingly different.

Caroline writes psychological and crime thrillers. The most recent, Silent Victim reached No.1 in the Amazon charts in the UK, USA and Australia. It has been described as 'brilliantly gripping and deliciously creepy'. Set in Notting Hill, London, her new DI Amy Winter thriller, Truth and Lies, is published by Thomas & Mercer.