This is fantasy that holds a mirror up to our own word, and isn't very different. If you love character-driven stories, they're all here. 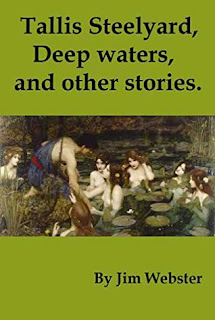 More of the wit, wisdom and jumbled musings of Tallis Steelyard. Discover the damage done by the Bucolic poets, wonder at the commode of Falan Birling, and read the tales better not told. We have squid wrestling, lady writers, and occasions when it probably wasn't Tallis's fault. He even asks the great question, who are the innocent anyway?

The book begins with the perils of being a painter’s apprentice. Someone has to rearrange the sitters’ hair, add the artful blossoms and dust away the crumbs from their snacks.
Several young men are sent to liberate valuable artefacts that are later sold for the upkeep of an asylum for the poor. Should things be black and white, right and wrong, or is it all about nuances, checks and balances?
We touch on fire-fighting, lady writers, solstice celebrations and more. Port Naain. All human life is there, and it’s documented with humour and acute observation.

Jim Webster is probably fifty something, his tastes in music are eclectic, and his dress sense is rarely discussed in polite society. In spite of this he has a wife and three daughters.He has managed to make a living from a mixture of agriculture, consultancy, and freelance writing. Previously he has restricted himself to writing about agricultural and rural issues but including enough Ancient Military history to maintain his own sanity. But seemingly he has felt it necessary to branch out into writing SF and fantasy novels. He lives in South Cumbria.

Just a thought
The love of books is among the choicest gifts of the gods.― Sir Arthur Conan Doyle
Posted by Kath at 11:53