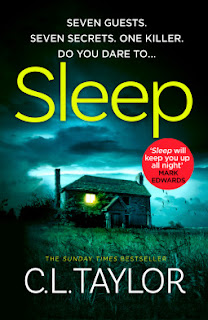 
All Anna wants is to be able to sleep. But crushing insomnia, terrifying night terrors and memories of that terrible night are making it impossible. If only she didn’t feel so guilty…
To escape her past, Anna takes a job at a hotel on the remote Scottish island of Rum, but when seven guests join her, what started as a retreat from the world turns into a deadly nightmare.
Each of the guests have a secret, but one of them is lying – about who they are and why they're on the island. There's a murderer staying in the Bay View hotel. And they've set their sights on Anna.
Seven strangers. Seven secrets. One deadly lie.
Someone’s going to sleep and never wake up…

My review -
What would deprive you of sleep? In Anna’s case it was guilt. Her involvement in a car accident in which two co-workers were killed and one paralysed, even though it wasn’t her fault, leaves her afraid of sleeping. When she does, she has night terrors and wakes screaming. She feels someone is stalking her and continues to feel like then after she moves to a remote Scottish island.

The author has always, to my mind, been good at creating tension, paranoia and fear. I have my eye on a suspect time and again only to be proved wrong. I really enjoyed this book and the snapshot of the lives of those staying on the island with Anna.

C.L. Taylor is the Sunday Times bestselling author of six gripping psychological thrillers. They are not a series and can be read in any order:2014 - THE ACCIDENT2015 - THE LIE2016 - THE MISSING2017 - THE ESCAPE2018 - THE FEAR2019 - SLEEPShe has also written a Young Adult thriller, THE TREATMENT, which was published by HarperCollins HQ and is currently writing her second, which will be published in June 2020.C.L. Taylor's books have sold in excess of a million copies, been number one on Amazon Kindle, Kobo, iBooks and Google Play and have been translated into over 25 languages and optioned for TV. THE ESCAPE won the Dead Good Books ‘Hidden Depths’ award for the Most Unreliable Narrator. THE FEAR was shortlisted in the Hearst Big Book Awards in the 'Pageturner' category.

~~~
Just a thought -
My grandma always said that God made libraries so that people didn't have any excuse to be stupid.― Joan Bauer
Posted by Kath at 12:55