Second in a series and it's a belter! 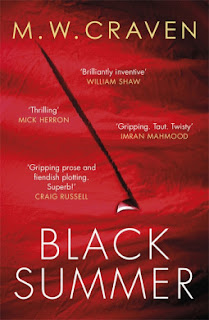 
ared Keaton, chef to the stars. Charming. Charismatic. Psychopath . . . He's currently serving a life sentence for the brutal murder of his daughter, Elizabeth. Her body was never found and Keaton was convicted largely on the testimony of Detective Sergeant Washington Poe.
So when a young woman staggers into a remote police station with irrefutable evidence that she is Elizabeth Keaton, Poe finds himself on the wrong end of an investigation, one that could cost him much more than his career.
Helped by the only person he trusts, the brilliant but socially awkward Tilly Bradshaw, Poe races to answer the only question that matters: how can someone be both dead and alive at the same time?
And then Elizabeth goes missing again - and all paths of investigation lead back to Poe.

I’m not sure which pulls me in most, a character-driven or a plot-driven story. With this series, which began with The Puppet Show, we have both. It can’t fail! This book hangs on the reappearance of a girl six years after she was supposed murdered. Her father is serving a sentence for killing her. Poe put him away – yet he has to be released as she’s obviously still alive. This gave rise to a sublimely good plot and the strange friendship between Washington Poe and Tilly Bradshaw once again comes into play - the old-fashioned detective and the seriously nerdy young woman with no ‘discretion setting’ on her tongue. It played out to an exciting and satisfying ending. I hope there’ll be more books to come with this duo. I’ll be waiting in line for them.

Although he was born in Cumbria, Mike Craven grew up in the North East before running away to join the army when he turned sixteen. After training as an armourer for two and a half years, he spent the next ten travelling the world having fun. In 1995 he left the army and completed a degree in social work, with specialisms in criminology, psychology and substance misuse. In 1999 he joined Cumbria Probation Service as a probation officer, working his way up to chief officer grade. Sixteen years later, he took the plunge and accepted redundancy to concentrate on writing. He now has entirely different motivations for trying to get inside the minds of criminals.


Between leaving the army and securing his first publishing deal, Mike found time to keep a pet crocodile, breed snakes, survive cancer and get married. He lives in Carlisle with his wife, Joanne, and his springer spaniel, Bracken.

The ability to read awoke inside of me some long dormant craving to be mentally alive. ― Malcolm X
Posted by Kath at 11:28