Second in a series set in the Norfolk Broads. They are a bit unusual which always draws me in. 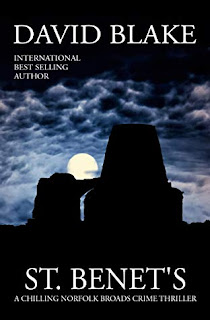 A girl thrown from a church tower, a man sacrificed to Satan, and a priest murdered at the hands of the Devil.When the body of an old man is found lying in the ruins of St Benet’s Abbey, his throat cut, a knife resting in his open hand, DI John Tanner and DC Jenny Evans are given no choice but to accept a ruling of death by misadventure. But when the body goes missing from its tomb, after a priest is found nailed to a cross, and another impaled on a stake, everything begins to point back to the murder of a teenage girl, thrown from the top of a church tower, some forty-three years before.Set within the mysterious beauty of the Norfolk Broads, this fast-paced British detective series is a cozy murder mystery with a slice of humour and a touch of romance, one that will have you guessing until the very end, when the last shocking twist is finally revealed.

When an elderly man, in the garb of a monk, is found dead in a ruined monastery, DI John Tanner investigates. After the funeral, more deaths result – and the body has gone missing. The dead man had a book indicating he believed he could rise from the read. The plot, as they say, thickens. As it does, it seems to hinge upon a death forty years ago.
I really enjoy this series. The two main characters, Tanner and his constable, DC Jenny Evans, have issues of their own, but have to work together regardless. The relationships are well drawn, the atmosphere of the broads brilliantly portrayed with places often difficult to access. I’ve been pulled into this series and I look forward to more.

David is a full-time author living in North London. To date he has written fifteen books along with a collection of short stories. He's currently working on his sixteenth, Moorings, which is the next in his series of crime fiction thrillers, after Broadland and St. Benet's.When not writing, David likes to spend his time mucking about in boats, often in the Norfolk Broads, where his crime fiction books are based.

How many a man has dated a new era in his life from the reading of a book.― Henry David Thoreau
Posted by Kath at 12:11