David Kelly's third Joe Ballen book is a triumph. Even better than the first two which I really enjoyed. 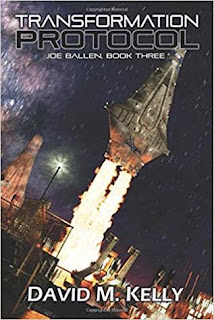 
With his life crumbling around him, Joe Ballen is close to going out in a blaze, fueled by cheap alcohol and self-hatred. But when something “out there” starts destroying spaceships and stations, the only JumpShip available to investigate is the Shokasta—locked away by Joe in an attempt to get justice for his family.
But when an old friend offers him the chance to return to space in the hunt for a missing ship, it proves more complicated than either of them imagined. With all sides of the political spectrum looking to grab a piece of the newly explored star systems, Joe soon realizes that some people will go to any lengths to get what they want, and are willing to sacrifice anyone in the process.
And when Joe’s past catches up with him in a way he couldn’t have seen coming, he must battle enemies new and old as well as his own inner demons.
The Joe Ballen series is a near future, sci-fi noir thriller series, featuring a smart-mouthed space engineer, engaging characters, cynical humor, and plausible science.

This is the third Joe Ballen novel and, for me, the most exciting yet. Joe is in a personal decline, divorced as he is from Dollie, whom nobody else can replace. He and his long-time friend are on a mission (in a craft Joe effectively stole) to search for the remains of a craft, and an atoll, that disappeared. I found this book had an edge-of-the-seat immediacy for me, probably because I know the characters better now. There’s a fair bit of humour in it but the world created by David Kelly is horribly believable – tension between two groups and another faction trying to stir up war. A treat for sci-fi lovers.

David M. Kelly writes fast-paced, near future sci-fi thrillers with engaging characters, cynical humour, and plausible science. He is the author of the Joe Ballen series and the short story collection Dead Reckoning And Other Stories. He has been published in Canadian SF magazine Neo-opsis.Originally from the wild and woolly region of Yorkshire, England, David emigrated to Canada in 2005 and settled in Northern Ontario with his patient and supportive wife, Hilary. Foot surgery in 2014 temporarily curtailed many of his favourite activities - hiking, camping, piloting his own personal starfighter (otherwise known as a Corvette ZR-1). But on the plus side, it meant a transition from the world of IT into life as a full-time writer--an opportunity he grasped enthusiastically.David is passionate about science, especially astronomy and physics, and is a rabid science news follower. Never short of an opinion, David writes about science and technology on his blog davidmkelly.net. He has supported various charity projects such as the Smithsonian's Reboot The Suit and the Lowell Observatory Pluto Telescope Restoration. He also contributes to citizen science projects such as SETI@home

Reading is that fruitful miracle of a communication in the midst of solitude.― Proust-M
Posted by Kath at 12:09