The Death of Jessica Ripley

Another Andy Barrett book - another Eddie Collins book. It's fantastic. 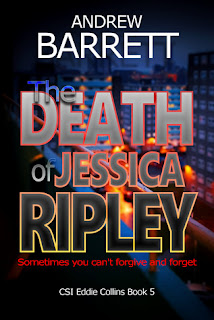 Sometimes you can’t forgive and forget.
Jessica Ripley didn’t kill her ex-husband. But everyone thinks she did. After serving twelve years for his murder, it’s time to get her own back on those who put her inside.
During those twelve years, Jessy’s son, Michael, has turned against her. Whatever mercy Jessy had for her intended victims, has gone.
CSI Eddie Collins is having a hard time watching his father enjoying life. He’s also having it tough in the form of two new recruits to his office. One is off his tree on drugs and the other wants his job.
And then the murders begin.
Can Eddie trust the evidence, or is someone out to get even?
And who did kill Jessy’s ex? To find out, buy The Death of Jessica Ripley.

This is a long book which flies by too fast. It’s a book you hate to leave, even to eat. The story has so much going on in it, but it’s never confusing – just busy, like life. There are characters you feel for and those you detest. There’s a lot of humour and loads of sadness and waste. I felt it was not entirely feasible in places but the story is so gripping you don’t care. That you keep flying through it is a testament to the excellence of the writing. It’s a book you wish you hadn’t read so you could read it afresh again. It’s a triumph!

Do you like your crime thrillers to have a forensic element that adds to the realism? Do you like your lead character to be someone intense and unafraid to take on authority?Andrew writes precisely that kind of crime thriller, and has done since 1996, about the same time he became a CSI in Yorkshire.He doesn't write formulaic fiction; each story is hand-crafted to give you a unique flavour of what CSIs encounter in real life - and as a practising CSI, he should know what it's like out there. His thrillers live inside the police domain, but predominantly feature CSIs (or SOCOs as they used to known).Here's your chance to walk alongside SOCO Roger Conniston and CSI Eddie Collins as they do battle with the criminals that you lock your doors to keep out, fighting those whose crimes make you shudder.This is as real as it gets without getting your hands bloody.

I'm old-fashioned and think that reading books is the most glorious pastime that humankind has yet devised ― Wislawa Szymborska
Posted by Kath at 10:17