A collaboration between Kelly Clayton and Grant Collins gives me slight shivers. It really happens to some people. 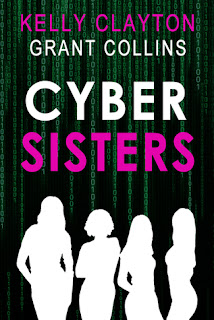 Do you know who you’re talking to online?Marianne Sinclair has it all. She’s rich, well-connected, and smart. Or is she? For Marianne has been scammed online. When she meets others in the same position, Marianne’s secret fears become reality, as her past threatens to poison her future. Who can you trust?Four women are victims of cybercrime, and one is left on the brink of destruction.They’ve taken everything, even your self-respect. Do you fall down, or fight back?

Bang up to date, this book warns us of the dangers lurking within the internet. A group of women have fallen for online scams and meet at a night class dealing with internet security. These characters are wonderfully drawn. One is worldly-wise and is cross with herself for falling for a scam. Others’ downfall was a kind heart, but they’ve all lost money. Some more than that. The authors have made our little inner fears into a cracking story where people find their past creeping in to affect the present. It’s superb, exciting and ultimately satisfying.

Kelly Clayton is originally from Scotland but has lived in the Channel Island of Jersey for most of her life. An avid reader, Kelly has been writing for as long as she can remember but decided to get serious a few years back. The reason why is a story in itself and there is a TV clip that can be accessed through Kelly's Facebook page that explains what lay behind her motivation to get that first book published.Kelly's first novel, Blood In The Sand, was published in 2015, Blood Ties came out in November 2016 and Blood On The Rock was released in October 2017. The three books are part of The Jack Le Claire Mystery series, mainly set in Jersey but venturing to other locations as well. They can be read as part of the series or as stand-alones.Kelly is working on a fourth Le Claire book, which is due to be published in 2018 . Grant Collins is her husband.

Just a thought - You can never get a cup of tea large enough or a book long enough to suit me.
C S Lewis