Goth of Christmas Past.

Debbie McGowan's new book, Goth of Christmas Past. A good reading touching on many aspects of growing up and becoming independent. 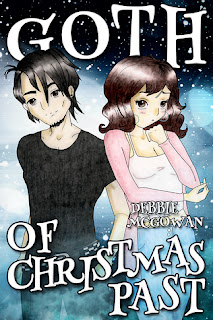 Krissi and Jay have been friends since school and the story hops back and forth between the present day run-up to Christmas and past occasions with their friends and family. The characters are from the author’s Hiding Behind the Couch series, which I haven’t read. There was a large cast, both the main characters’ friends and their parents’ friendship circles and at times I wished I had read the earlier books. Nevertheless, the story stands well on its own. There are danger points and threats, and both Krissi and Jay have their own baggage. The author excels at characterisation and this is what draws you in. They feel real, and you care. It’s not a Christmassy story in the traditional sense but it’s a community pulling together at that time of year. A very good read.

Debbie McGowan is an award-winning author of contemporary fiction that celebrates life, love and relationships in all their diversity. Since the publication in 2004 of her debut novel, Champagne—based on a stage show co-written and co-produced with her husband—she has published many further works—novels, short stories and novellas—including two ongoing series: Hiding Behind The Couch (a literary ‘soap opera’ centring on the lives of nine long-term friends) and Checking Him Out (LGBTQ romance). Debbie has been a finalist in both the Rainbow Awards and the Bisexual Book Awards, and in 2016, she won the Lambda Literary Award (Lammy) for her novel, When Skies Have Fallen: a British historical romance spanning twenty-three years, from the end of WWII to the decriminalisation of homosexuality in 1967. Through her independent publishing company, Debbie gives voices to other authors whose work would be deemed unprofitable by mainstream publishing houses.

I haven't read a Debbie McGowan book I've been disappointed in.


~~~
Just a thought - We lose ourselves in books. We find ourselves there too.