This is the fourth in this cosy crime series by Alice Castle and I'm rather addicted to them! 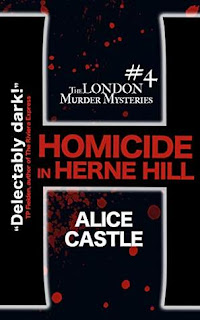 Beth Haldane, SE21’s premier – and only – single mum amateur sleuth, is really pleased to find a new friend at the school gates, in the shape of irrepressibly bouncy Nina. As well as a way with words, Nina has a puzzle she wants Beth to solve, centred on the solicitor’s office where Nina works in Herne Hill.But as the mystery thickens, threatening to drag in not just Nina and her boss, but the yummy mummies of Dulwich, too, Beth is about to find out just how far some people will go to keep up appearances. Join Beth in this fourth instalment in the London Murder Mystery series for her toughest case yet.

This is the fourth book (though they would all work alone) in a series by Alice CJust a thought -astle. The writing is funny and perspicacious, including remarks on keeping up with the yummy mummies and the problems of rearing a ten year-old boy in modern times. There’s tension between Beth and her current boy-friend (or is he yet?) Harry, the police officer and this heightens her self-doubt about snooping. Yet again she finds a body. Yet again, you know she’s too nosy but you’d be the same! I love this series. Highly recommended for cosy crime lovers.

Before turning to crime, Alice Castle had a long career as a feature writer on national newspapers including the Daily Express, The Times and The Daily Telegraph. Alice grew up in south London and, after a brief stint in Brussels (where her first novel, Hot Chocolate, is set) she is back where she belongs, dreaming up adventures for her heroine, amateur detective and single mum Beth Haldane. Alice is married with two children, two stepchildren and two cats. Find out more about her London Murder Mystery series on her website, www.alicecastleauthor.com. Death in Dulwich was published in September 2017 by Crooked Cat Books and was #1 in the Amazon Satire/Detective charts in the UK, US, Canada, France, Spain and Germany. The Girl in the Gallery came out in December 2017 and the third in the series, Calamity in Camberwell, will be published on 13th August 2018. Homicide in Herne Hill will follow in autumn 2018, with more books in the pipeline.

Just a thought  - 'I find television very educating. Whenever somebody turns on the set, I go into another room and read.' Goucho Marx
Posted by Kath at 12:56