The Summer of the Bear

Bella Pollen is a new author to me and this book was chosen for out local book club. I may never have read it otherwise. 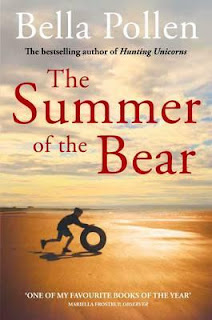 It took a while for this story to get going, for me, bobbing about as it did between the points of view of various characters. Once it gripped me it didn’t let go. Some of the characters were unlikable. The bereaved Letty, losing sight of her children’s need in her own grieving. Alba, monstrous  middle child. But I adored Jamie with his deep connection to his late Dada. The story of the father’s death and its repercussions is beautifully interwoven with the family’s problems and the story of the castaway bear. A great read.

Raised in New York , Bella Pollen is a writer and journalist who has contributed to a variety of publications, including American Vogue, The Spectator, The Times & The Sunday Telegraph.Author of four previous novels, Midnight Cactus, Hunting Unicorns, Daydream Girl and All About Men, Pollen has tackled a broad spectrum of subjects from the decline of the British Aristocracy to the immigration issues of the US/Mexican Border.With Summer of the Bear, Pollen returns to a place beloved of childhood holidays, an isolated and wind swept island off the west coast of Scotland where a young boy believes an escaped bear may hold the key to his diplomatic father's sudden death. Part mystery, part ghost story, part family drama, Pollen has delivered a riveting and magical story about a family rocked by loss and bereavement. Pollen is married with four children and divides her time between London and the American mid-west.

Just a thought - You know you've reead a good book when you turn to the last page and feel you've lost a friend. Paul Sweeny.