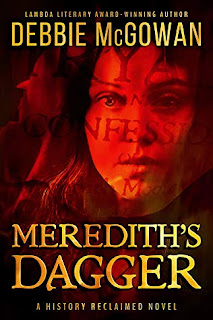 Huddled in a doorway, unseen by the men passing on great horses, Meredith watched from within the hood of her cloak. The pain of the cold, wet morning impaled her, rooting her in place, even as the cat rubbed against her shins with a force that should have felled her. She shooed him away. Go home. But he would not.She wished she had died that night. She wished she had died, for to live like this was not to live at all.* * *When Richie Moorcroft takes a housekeeping position to finance his studies, it means moving back to his childhood home: an ancient, almost-derelict cottage locals claim is haunted. But he never believed those stories; he knows where they came from, and in any case, he has a job to do: keeping nineteen-year-old Julian Denby on the straight and narrow without Julian realising his wealthy parents are paying Richie to do so.Luckily, Julian’s not very astute, although the same can’t be said for their newest housemates: Richie’s bestie, Anneke, and Julian’s older sister, Tamara. Add in George, the cat who appeared from nowhere and is in no hurry to leave, and that makes five…about to uncover the sinister history of their new home.

You always get a good story and credible characters in a Debbie McGowan book.
Take a 17th C cottage. Add four young people from widely differing backgrounds, a stray cat and a strange artefact discovered when renovating. There you have the ingredients for a gripping story with a historic layer beneath. We move back and forth in time between the Meredith of the title and the four in the cottage. There are numerous other characters involved and the story goes much deeper than its slightly spooky surface. It makes us think about a woman’s right of self-determination – then and now. Such a good story on so many levels.

Debbie McGowan is an award-winning author of contemporary fiction that celebrates life, love and relationships in all their diversity. Since the publication in 2004 of her debut novel, Champagne--based on a stage show co-written and co-produced with her husband--she has published many further works--novels, short stories and novellas--including two ongoing series: Hiding Behind The Couch (a literary 'soap opera' centring on the lives of nine long-term friends) and Checking Him Out (LGBTQ romance). Debbie has been a finalist in both the Rainbow Awards and the Bisexual Book Awards, and in 2016, she won the Lambda Literary Award (Lammy) for her novel, When Skies Have Fallen: a British historical romance spanning twenty-three years, from the end of WWII to the decriminalisation of homosexuality in 1967. Through her independent publishing company, Debbie gives voices to other authors whose work would be deemed unprofitable by mainstream publishing houses.

Just a thought
A good book should leave you... slightly exhausted at the end. You live several lives while reading it  - William Styron
Posted by Kath at 11:33