Powerful debut novel from Simon J Lancaster. First of a proposed trilogy - and I'm up for reading the rest. 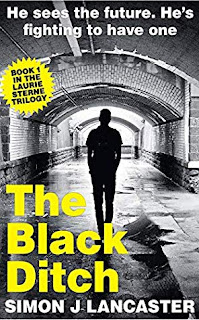 LAURIE STERNE feels like he’s been cut adrift in space. His father has been shot dead, caught in the crossfire of a gangland war that has also claimed his boss’s life. Laurie is a refugee who lost his adoptive mum years before and doesn’t know where he was born, let alone who his birth parents were. But he’s not alone in the world: someone is trying to kill him.This is London, 2050, a dumping ground for climate refugees and dissidents. Gangs rule, murder goes unpunished and the police make sure you can’t escape.In his struggle to stay alive, he finds an ally: his former boss’s secret daughter.But with the killer predicting his every move, is the man without a past being betrayed by the woman who seems to offer him a future?

It’s 2050 and some things we are aware of now have come to pass. Basements in London flood at high tide because of the rising sea-level. Tower blocks are ruled by gangs and London is effectively a prison city. The government, known as Jack, is a dark threat in the background. The gangs do their work for them – people are killed with no comeback. Laurie Stern, even in such a place, falls in love.

This is a grim foretelling of the future and the direction of modern politics makes it seem all too possible. I enjoyed the chase aspects of this story. Laurie doesn’t know, right to the end, who he can trust, and his life is on the line. The story is very readable and becomes extremely exciting as Laurie’s life is in danger. This is the first of a proposed trilogy and it’s intensely dark and very gripping. I’ll be reading the rest.

Simon J Lancaster is the author of The Black Ditch, the first in the Laurie Sterne trilogy of dystopian future thrillers. Prior to writing novels he was a national newspaper journalist in London, as well as a music critic and private pilot. He has written short stories and plays and, after reading extensively about climate change, concluded that the fantasy gun-play of contemporary-set action novels would be the lived experience of our coming world.

Books, the children of the brain ― Jonathan Swift,
Posted by Kath at 11:02