Debut novelist Will Templeton has produced a winner here. 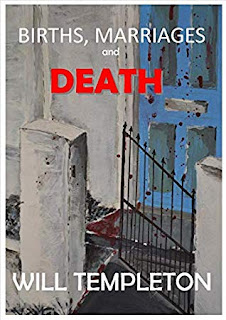 Edward Maxey, Registrar of Births, Deaths and Marriages for a town in South Yorkshire, is approached by distressed Spanish girl Alicia for help in finding her erstwhile lover, and is so captivated by her childlike naivety and vulnerability that he is moved to assist her. When the man in question is found dead she becomes the prime suspect and Maxey himself is implicated. Convinced of the girl’s innocence Maxey jeopardises his career and his family by shielding Alicia from the attentions of the police, even though one of the detectives on the case is Maxey’s lifelong friend, Detective Sergeant Luke Preston. Wading through a maze of suspects and confusion Preston must juggle this investigation alongside the search for a group of missing children, whose safety is increasingly at risk.

This is a fantastic debut novel, involving two best mates, one, Preston, a Detective Inspector and the other, Maxey, a Registrar. There’s been a murder and a messy one too. The victim had had an affair with a young girl in Spain when ‘on business’ and she’s been writing to him. He’d given her his friend’s address so she came to visit the wrong person. The friend’s son has been sucked into a gang and involved in criminal activity – and other things. These two groups finally mesh together in a clever bit of plotting. But Maxey finds himself hiding important evidence from his friend. Can their friendship survive? Who thought being a registrar could be so dangerous an occupation? I found this a real page-turner of a book and I look forward to more from Will Templeton.

Many years ago Will Templeton worked briefly in the tax collectors' office, and, deciding that wasn't for him, he then tried his hand at such varied vocations as hairdresser, bricklayer and mechanic, before finally finding a place at Doncaster Register Office. He stayed there for over thirty years, working his way up from Receptionist to Superintendent Registrar, eventually throwing it all in to become a full-time scriptwriter. Over the years he has also written many plays which have been performed to glowing reviews. This is his first novel.

You have to remember that it is impossible to commit a crime while reading a book -― John Waters
Posted by Kath at 11:42

Email ThisBlogThis!Share to TwitterShare to FacebookShare to Pinterest
Labels: Will Templeton - Crime