Fiona and the Whale

This book by Hannah Lynn is a delight to read. 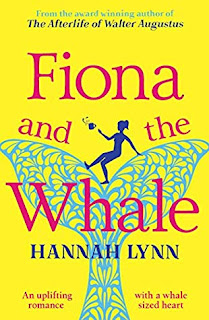 With her life on the rocks, it is going to take a whale sized miracle to keep her afloat.

Event planner Fiona Reeves did not have her husband's sudden departure on her schedule. However, she’s certain that it's only a hiccup and he'll be back in no time, begging for forgiveness. Fortunately there’s a distraction of mammoth proportions swimming in the River Thames.
Absorbed by the story of Martha the sperm whale, Fiona attempts to carry on life as usual as she awaits her husband's return. However, nothing can prepare her for the dramatic turn of events that throw her life into ever greater turmoil. The road ahead has many paths and for Fiona it’s time to sink or swim.

My review -
This is the story of a woman in denial about the fact that her husband has left her. She’s convinced that, so long as she keeps on as normal, running her business, he’ll return. When a whale is stranded in the Thames, her priorities change completely. This was a book in which there was plenty of action, not all good, but I couldn’t help turning the pages to find out what happened. The whole book is very satisfying and I enjoyed it a great deal.

Hannah Lynn is an award-winning novelist. Publishing her first book, Amendments - a dark, dystopian speculative fiction novel, in 2015, she has since gone on to write The Afterlife of Walter Augustus - a contemporary fiction novel with a supernatural twist - which won the 2018 Kindle Storyteller Award and the delightfully funny and poignant Peas and Carrots series.While she freely moves between genres, her novels are recognisable for their character driven stories and wonderfully vivid description.She is currently working on a YA Vampire series and a reimaging of a classic Greek myth.Born in 1984, Hannah grew up in the Cotswolds, UK. After graduating from university, she spent ten years as a teacher of physics, first in the UK and then around Asia. It was during this time, inspired by the imaginations of the young people she taught, she began writing short stories for children, and later adult fiction. Now as a teacher, writer, wife and mother, she is currently living in the Austrian Alps.

Books and doors are the same thing. You open them, and you go through into another world ― Jeanette Winterson
Posted by Kath at 10:35