My first novel from Kim Liggett, The Grace Year, is a thundering good read. 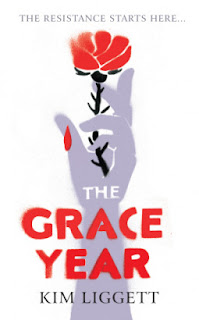 No one speaks of the grace year.It's forbidden.We're told we have the power to lure grown men from their beds, make boys lose their minds, and drive the wives mad with jealousy. That's why we're banished for our sixteenth year, to release our magic into the wild before we're allowed to return to civilization.But I don't feel powerful.I don't feel magical.Tierney James lives in an isolated village where girls are banished at sixteen to the northern forest to brave the wilderness - and each other - for a year. They must rid themselves of their dangerous magic before returning purified and ready to marry - if they're lucky.It is forbidden to speak of the grace year, but even so every girl knows that the coming year will change them - if they survive it...The Grace Year is The Handmaid's Tale meets Lord of the Flies - a page-turning feminist dystopia about a young woman trapped in an oppressive society, fighting to take control of her own life.

I absolutely love this book. I can see people drawing comparisons with Golding’s Lord of the Flies but the boys were cast up on their island by accident. In The Grace Year, all girls in their teens spend a year as a deliberately isolated group in order to ‘rid them of their magic’. There are poachers in the vicinity to pick off those girls who don’t make it back – often a high number. I enjoyed the way the women were portrayed, both before and after the Grace Year in question. It wasn’t simply the way they were downtrodden, but the underlying conspiracy of women and their hidden strengths. It was easy to engage with the characters, to take sides and to root for those you fell in love with. Tierney, the star of the book, is determined to be herself. The way she does it is exciting and marvellous. I became totally absorbed in this world and I highly recommend the book.


Thanks to Netgalley for the opportunity to read it before publication.

Kim Liggett, originally from the rural midwest, moved to New York City to pursue a career in the arts. She's the author of Blood and Salt, Heart of Ash, The Last Harvest (Bram Stoker Award Winner), The Unfortunates, and The Grace Year. Kim spends her free time studying tarot and scouring Manhattan for rare vials of perfume and the perfect egg white cocktail.

You want to remember that while you're judging the book, the book is also judging you ― Stephen King,