First of a series by Keith Nixon and it's off to a cracking start. 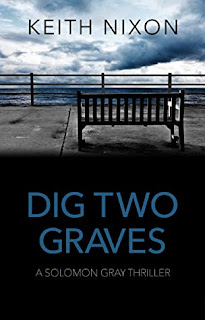 A cold, broken teenager lies beneath the looming shadow of his apartment building in an apparent suicide.Detective Gray stares, with tired eyes, at the body of Nick Buckingham, wondering why, at the age of 16, he would see no other choice but to jump from his balcony in such a final act ... but more importantly, wondering why this teenager, who he has never met, has Detective Solomon Gray's phone number stored in his phone ...Facing his demons, follow Detective Sergeant Solomon Gray as he tries to unravel a murky world of lies and corruption to find the answers he's desperate for.

This is only my second Keith Nixon book but he tells a great story. There are enough characters (but not enough to confuse you) and plenty going on. The title comes from a saying by Confucius: when you embark on revenge, dig two graves. This tells you that things won’t go straightforwardly for someone. I found it fast paced, engaging and I felt for the main character, Solomon Gray – and others in the story. It’s the first of a series and it certainly makes me want to find out more. Highly recommended.

Keith Nixon is the best selling author of fourteen novels, including the Margate based Solomon Gray series with 200,000 copies in circulation and reached no.1 on Amazon in the UK, US, Canada and Australia.Keith lived near the gritty seaside town of Margate, where all his novels are based, for 17 years before relocating to the edge of the Peak District with his family where he lives today.