Maureen's (Not So Great) British Cake Off

Another in the Maureen series, but you can read it as a stand-alone. It's short but funny. How do they keep getting better? 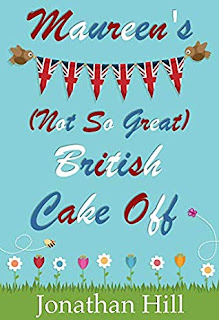 The smash hit comedy character returns in a brand new novella.Maureen finally has her new garden and she sees the perfect chance to show it off by hosting a cake-baking contest for her friends.Unfortunately, the guests (both invited and uninvited) seem determined not to allow the event to pass smoothly…


I’m a great fan of Maureen’s and in my opinion these stories are getting better each time. Mo has a new gardener and the place has never looked so good. It seems a shame to waste it. She decides to hold a garden party to include a baking contest. Picture the tent, the steely gaze of Paul Hollywood, the critical but kind observations of Pru Leith. Well, it’s nothing like that. A pleasant dream becomes a nightmare and her friends Louisa and Tim, surprisingly, still help her out of her self-inflicted problems. Read it – it’s a laugh.

Jonathan Hill is an author from Manchester, UK.His work isn't confined to one genre, but he has already published a number of gay literary fiction books to high critical acclaim. His debut novel 'FAG', a hard-hitting story set in an English boarding school in the 1930s, was named as the overall winner in the Self-Published and Small Press 2014 Book Awards.He has also penned the hit comedy series of Maureen books, in addition to numerous short stories and 100-word drabbles. Jonathan firmly believes that writing should not only entertain but also enhance and change the way readers view the world.When he's not writing and working as a pharmacist, he enjoys painting, photography and going to the theatre.