The books that taught me to love indie publishing

The books that taught me to love indie publishing -

Cornelius Harker has an academic background in Gothic literature and writes dark Gothic fantasy like no-one else!  His Words to the Wise Saga is written in an 18th century voice and the elegant prose gives me goosepimples. 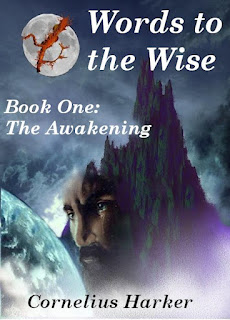 Words to the Wise Book 1: The Awakening

Link for Amazon.com     Words to the Wise Book 1: The Awakening

Cornelius Harker's dark Gothic fantasy introduces us to the Wanderer, who cannot recall his past and faces a hopeless future as a wretched, habitual drunkard. The novel takes us with him on a quest to find out who and also what he is. This gloriously wide-ranging story includes a stricken village, sorcerer, haunted abbey, dark and gloomy castle, ancient curse, sinister but entrancing female, oh, and blood - buckets of blood. It is Gothic after all. However, this is no stereotypical, gratuitous blood bath but a thoughtful look at some of the deeper questions faced by us all such as the nature of Godhead and the meaning of life and death - does death merely curtail life or does it give a meaning and sense of purpose to it?

The Wanderer is a character I wanted to like in spite of his unprepossessing image as the story began. I liked his love for an orphaned child, his gentle and humorous exchanges with a novice monk and his frank admission of his own failings. His propensity occasionally to flash into anger or to seek revenge, however, made me want to smack him! This is the sign of a truly three-dimensional character. I felt his humanity.

The book had a climax but not a resolution. So many questions asked were left unanswered. Fortunately, I have Book 2.

The author has a unique voice amongst contemporary writers and uses some truly beautiful imagery. Even if this is not your usual genre I would urge you to read this book, if for no other reason than that Cornelius Harker is a simply superb story teller. 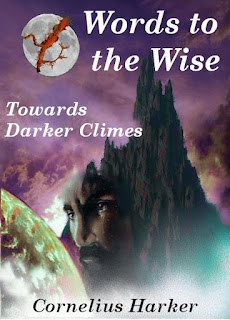 Words to the Wise Book 2: Towards Darker Climes

Link for Amazon.com  Words to the Wise Book 2: Towards Darker Climes
My review -

The second book in Cornelius Harker's Words to the Wise Saga, Towards Darker Climes, continues the journey of The Wanderer in his voyage of self discovery. We also learn more about him through his interaction with various characters including his travelling companion, the irrepressible but untrustworthy Rickard.

The author allows us a deeper insight into The Wanderer's complex character. He is often anguished, morose and irascible but also has a piercing love of natural beauty and shows a deep wisdom and concern for others. I am growing rather fond of him but fear that no happy ending awaits him. He is horrified by what he perceives to be his own guilt in that past which he struggles to remember except through snatches of dreams. He is driven to seek information in the town of Sirrenvaag and he hopes to find out more about the dark apocalyptic future to which mankind is heading.

Mr Harker's second book in this Saga is even better than the first and grabs the reader's attention from page one. It is lit by beautifully written passages or phrases that stopped me in my tracks. I have not read such compelling work before and I can't get enough of it.

Cornelius Harker is a consummate story teller with the careful writing skills and considered word choices of a poet and he leaves us at the end of this book on a sharply indrawn breath. I see I am not the only reader desperate for more and I look forward eagerly to Book Three - Sirrenvaag.