This is the first of Will's books that I've read although I know him from various forums.  I like his sense of humour and it's there in full in this book. 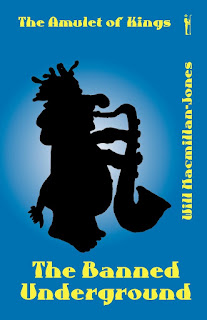 The Amulet of Kings - The Banned Underground

Amazon.com  The Amulet of Kings - The Banned Underground


I don’t know why I didn’t read this book ages ago – funny fantasy is so far up my street it’s practically sitting on the doorstep.  I think the blurb put me off and I expected a weak knock-off of Pratchett’s Band with Rocks In.  I’ve been wrong before.  (Often!)  The story was built from classic fantasy components; witches, mages, dwarves, dark lords, the Tuatha; and was embellished with some wonderfully witty humour and decorated with musical allusions.  A couple of teenage siblings are packed off to stay with their Auntie in the Lake District.  She has some strange powers and give the kids a couple of pendants to wear which come in very useful as they get embroiled in a battle under the Lakeland fells.

I have to say though, that I don’t like footnotes outside of a technical work.  In almost all cases the material they contain is better used in parentheses so as not to hold up the flow of the story.  There are many characters, so I didn’t feel I got to know any very well but of course this is the beginning of a series so there’s still time for that.  I don’t want to sound as if my minor quibbles coloured (colored!) my view of the book though.  Its light-hearted nature made it a joy to read.  The author expresses himself well and clearly and he evidently enjoys and delights in the word-play he uses to entertain us.

Will Macmillan Jones has a clever, jolly wit and it makes his work very enjoyable.  I shall be following this series with interest!
Posted by Kath at 16:25